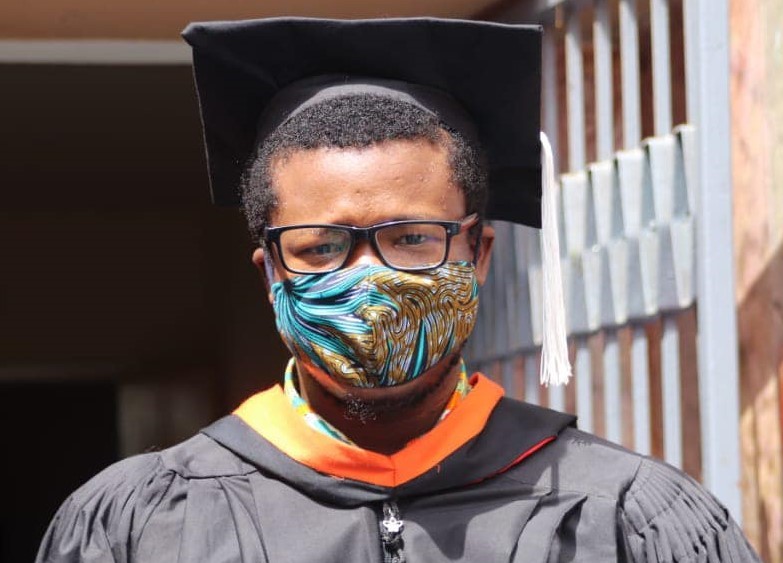 The commencement speaker at the second of four convocations of the University of Liberia (UL) 101st Class of 2020, Mr. Mahmun Johnson has told the graduating class that their being on earth is to serve a bigger purpose, which includes service to their community, country, and the planet.

The commencement speaker told the graduates that their service to the planet should always exceed the material returns they receive.

“Anyone, anywhere, can be of service in one way or another. Start where you are. Identify a need, and find like-minded folks to work along with you to begin to create a solution,” Mr. Johnson admonished the graduates, noting that Liberia has many difficult challenges, but each of these challenges is an opportunity to innovate and to improve the lives of their fellow Liberians.

Recounting some of his personal experiences, Mr. Johnson said, along the way he had some huge failures, but he also had some pretty amazing successes. According to him, there will never be such a time when you have all the money, all the knowledge, all the connections, and all the resources to start to make a difference.

Further, he said one does not have to wait until a vacancy is announced because they probably never will announce it.

“And when they do, there will be way too much competition, that will make it harder for you,” he said.

Tuesday’s convocation at SKD Sports Complex in Paynesville was the second of four commencement convocations of the 101st Class of 2020 called “MENI NINA,” – an expression from the Kpelleh language which is translated in English as “new beginning.”

A total of 963 candidates graduated from the Thomas J. R. Faulkner College of Science and Technology, the William R. Tolbert, Jr. College of Agriculture and Forestry, and the College of Engineering.

of J-Palm Liberia, said he intended sharing his experience with the graduating class because as a young man, he found himself to be in the same age group as many of the graduates.

J-Palm Liberia is a Liberian – owned company that manufactures skin and hair care products from Palm Kernels, based in Liberia.

Mr. Johnson reminded the graduates that their degrees do not automatically make them experts or professionals, but their level of proficiency, diligence, integrity, and commitment to whatever they do will make them experts.

He urged them to do their best always because they never know who’s watching them.

“Don’t wait for opportunities to fall from the sky,” Mr. Johnson said, adding, “technology has made it easier for people to find information and so the competitive environment is becoming exponentially larger.”

He concluded that when God blesses the graduates, they must remember to be a blessing to others, noting that all blessings are manifestations of God’s grace.

In his commencement greetings to the graduates earlier, the President of the University of Liberia, Rev. Dr. Julius Sarwolo Nelson reminded the graduates that their achievement would not have been possible if not for the special grace of the Almighty Creator.

“You have finally reached the end of this phase of your academic sojourn, and the entire University of Liberia family is celebrating with you today,” Dr. Nelson told the graduates.

He said after 173 years, Liberia still finds itself grappling with the challenges of nation-building and infrastructural development.

The UL President further stated that he is cognizant of the fact that the nation will not make progress if the necessary investment is not made for the younger generation in preparing them to assume the helm of leadership.

“This is why the University of Liberia is proud to contribute to this process of developing and preparing young minds for the effective and efficient management of our national platform,” Dr. Nelson said.

“We are happy to partner with the Tubman National Institute of Medical Arts (TNIMA) and the John F. Kennedy Medical Center (JFK), in our Nursing and Midwifery Articulation Program,” Dr. Nelson said. “We are proud of all 80 of you, as you walk out of the halls of the great Lux in Tenebris today.”

Speaking to the entire graduating class, Dr. Nelson challenged them to keep making the university proud, excited and to go and represent the university in the larger society with knowledge, skills and abilities.

“Go out and shine. Go out and make the difference. Go out and demonstrate professionalism, productivity and patriotism. Go out and brighten the light,” Dr. Nelson mandated.

Delivering his valedictorian address, Dorbor Blama from the College of Agriculture and Forestry said the year 2020 was not an easy year for students because of the outbreak of the Covid-19 pandemic.

Dorbor Blama recalled that there were a series of challenges, and many students dropped out from the University of Liberia due to difficulties in understanding the e-Learning method that was introduced in the wake of the health crisis.

However, he said, instructors had to work hard and used extra time and money to transform their courses from in-person to online.

“Graduates seated here today comfortably had to work very hard to cope with the new system and so many other challenges. All we can say is, 101 class of 2019/2020, Meni – Nina, made it by the grace of God,” he reflected.

He thanked the Government of Liberia and the authorities at the University of Liberia for the transformation of the university thus far.

“The establishment of a digital platform for registration and the e-learning MOODLE are immense contributions to the learning process of the new age, even though, there are still some challenges,” he noted.

Speaking on the topic: “The Power of Light,” the Valedictorian defined light as a natural medium emanating from the sun and other very hot sources within which vision is possible.

“This means that light has the capacity to attract the vision of every creature. The moto “LUX In TENEBRIS”, interpreted as light in darkness, inscribed on the logo of the University of Liberia, proves that light is effective in its attraction,” said Blama.

He noted that truly this light has attracted the visions of other countries like America, Israel and China, among others who have sent materials and human resources to strengthen the capacity of the students since the establishment of the University of Liberia, formerly the Liberia College.

The Valedictorian indicated that graduates from the University of Liberia in those days were truly considered as the light in the darkness and were therefore absorbed by various entities to begin a job.

He said they were like a well prepared meal needed by a hungry man to satisfy his hunger.

“To our stakeholders, chiefs and noble men and women of this nation, kindly consider us as a set of prepared meal ready to satisfy your hunger in the areas of Agriculture, Engineering, Science, Nursing & Midwifery through your employment or scholarship opportunities,” he concluded.