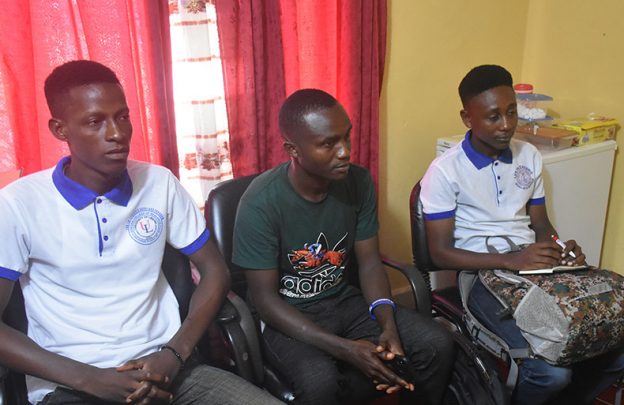 The President of the Meni Nina Class of 2019/2020 at the University of Liberia (UL), Mr. Abraham F.J. Fokoe, is calling on fellow students to be mature in decision – making and accept dialogue as a path to amicable resolutions when there are grievances, instead of invariably resorting to protests which negatively impact public perception about the university. In a conversation with UL Relations on Tuesday, Fokoe also frowned on mainstream media and the public for being too keenly interested in gloomy stories from the university but less so in the many positive developments that are taking place.

Abraham F.J. Fokoe is a student in the T.J.R. Faulkner College of Science and Technology, majoring in Biological Sciences at the University of Liberia and a prospective graduate.

Fokoe has observed that the University of Liberia has been portrayed negatively by students’ actions like protests that are often captured in the media, while the positive things that are also being achieved by the university, including graduating students with highest honors, are not given attention by the media.

“When students stage protests on the university campuses, you will see the media, you see journalists coming in to capture the negative of the university,” he lamented.

Bothered by this, he said his class of 2019/2020 and the university as a whole want to be seen differently, disclosing that they want to change the dynamics in an effort for the University of Liberia to be known for positive things.

According to Mr. Fokoe, students are about to shift from negativity to positivity, noting that there is an opportunity for young people to change the country, and he does not think they should sit on that opportunity without bringing in a change.

He suggested also that the change must begin with the students and the University of Liberia, thereby calling on his colleagues to ensure that they channel whatever disenchantment they may have to the relevant authorities and seek dialogue instead of staging protest and demonstrating on the university campus.

On the basis of their plan to see a change, student Fokoe said his team of class leaders has started engaging other students through the Facebook platform of the senior class, giving them positive messages and also having regular meetings with the class members.

“Basically we said this year we want to help to rebrand the University of Liberia and we have been charged with the responsibility in making sure that our students remember the class name, the class of 2020,” he said.

He continued that in rebranding the university, there should be a system and the system should be respected by the administration. He concluded that the class does not want to be called the 101st class, but the MENI NINA Class of 2019/2020.