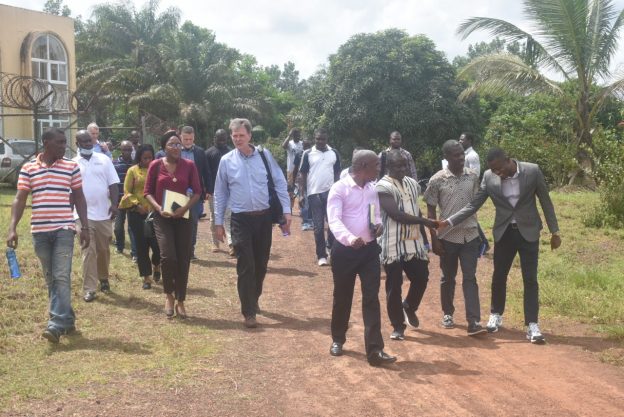 A high level delegation of the United States Government on Monday, June 13, 2022 paid a visit to the campus of the David A. Straz – Sinje Technical and Vocational College of the University of Liberia (UL) in Grand Cape Mount County. The visiting U.S. delegation included representatives from the U.S. Embassy near Monrovia, USAID Liberia and the U.S. Centers for Disease Control and Prevention (U.S. CDC).

Though undergraduate students are not in school right now due to an ongoing renovation work at the University of Liberia, some students from the Sinje campus however attended the meeting with the U.S. delegation.

Following the discussions, the US delegation was led on a tour of facilities at UL’s Sinje campus by UL authorities and saw the library, computer lab, the internet infrastructure which is not providing service right now, the farm, piggery, and poultry, among others.

Mr. Maybury however spoke of a U.S. Congressman from California who is interested in forging partnership with Liberian institutions, adding that his visit to the College in Sinje gave him the idea that he needs to keep the University of Liberia in mind.

Mr. Maybury also encouraged the UL authorities to invite the U.S. team again so that they can make their own schedule.

Welcoming the U.S. team, Assistant Professor Adolphus Nippae, Dean of the David A. Straz – Sinje Technical and Vocational College, informed the U.S. officials that the college presently has three programs—Engineering, Agriculture and Education. According to Dean Nippae, for each of these, the university envisions adding new programs. For the Engineering program, he said they intend adding some information technology programs, and a renewable energy program that will focus on training solar energy technicians. “And then one of the biggest [things] we are thinking of is to train Solar Electricity technicians. As the world goes green … so we think we can get involved with that,” said Dean Nippae.

He explained that when there is no fuel for the diesel generator on the Sinje campus, it affects the operation of the college because works that are computer – based or require internet service would be stalled. “So we are hoping that if we can get a solar panel project, which will free us from paying bills, then we can become more sustainable,” said Dean Nippae.

For the Agriculture program, Dean Nippae stated that UL has signed a partnership agreement with the National Fisheries and Aquaculture Authority (NaFAA) to offer an Associate degree in the sector.
Considering the need for food preservation in Liberia, Dean Nippae said the university is thinking about going into food technology to enable the processing and preservation of agricultural products for internal consumption and export.

For Education, Nippae said the College intends to include secondary education into its programs, considering that there are just a few high schools in Grand Cape Mount County. Nippae said he is also keen to have a Nursing and Midwifery program in the Sinje Technical and Vocational College, pleading with the U.S. CDC for its intervention. He also said the University of Liberia is looking at developmental health issues, and it is also in touch with the Ministry of Education and the Ministry of Youth and Sports for the activation of UL’s technical and vocational education (TVET) program.

Madam Kula Fofana, Assistant Dean for Students Affairs, David A. Straz – Sinje Technical and Vocational College, said the interest was the aftermath of the U.S. delegation’s visit and how the students and the community can benefit from it. She recalled that through a grant, the David A. Straz – Sinje campus was given to UL by an American philanthropist, the late Mr. David A. Straz, following citizens’ requests when former President Ellen Johnson – Sirleaf visited Grand Cape Mount County.

In the same vein, Dean Fofana requested the U.S. delegation to consider extending an invitation to UL students at Sinje, and other young people in Grand Cape Mount County to participate or benefit from some of the Embassy’s programs and opportunities. She talked about two students who, following their graduation from the agriculture program at Sinje, have gone ahead and established their own agri businesses after being awarded small grants. Madam Fofana said one of the students is doing plantain business while the other is doing cassava processing.

“So these kinds of students who are doing [a] lot of things from very limited opportunities here, I think it’s important to think of how the multiplying effect of that can have on the community as well,” she said.

“So we would definitely love to hear more and see where there’s possibility for collaboration after this meeting,” said Dean Fofana