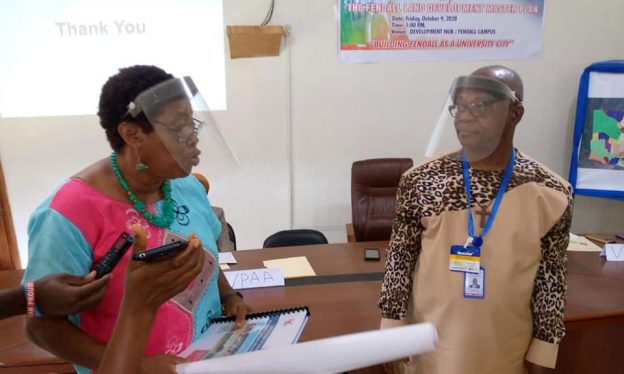 The University of Liberia (UL) Fendall Land Development Committee Chair and Vice President for Institutional Development and Planning, Prof. Weade Kobbah – Boley, has given a historical account of the Fendall property deeded by the government with 5,800 acres of land during a presentation of the Master Plan to President Rev. Dr. Julius J.S. Nelson, Jr.

Having received the Fendall Master Plan on Friday, October 8, 2020, Dr. Nelson has indicated that his management team will make the development of a University City to be in the top five of UL’s priorities.

During her presentation, Prof. Boley noted that the Fenall Land story started as far back as the 1960s when the Government of the Republic of Liberia realized that the Capitol Hill campus was too small and there was a need to relocate.

She stated that President Tubman negotiated with international partners, including the Government of the United States of America, to help Liberia build a new university. In 1962, she said, President Tubman had acquired land in the Fendall vicinity for the university as government’s contribution to the new University of Liberia.

At that time, Prof. Boley explained that the government was not in the business of deeding land to itself. As such, she noted that none of the government institutions or entities had any deed to a land.

“The legal rationale for that is that the government is the custodian of all the land space, all the air space and all the water space in the Republic of Liberia and therefore it could not give a deed to itself,” she explained further.

According to her, payments for these lands were made up to former President William R. Tolbert’s term when Former President Ellen Johnson – Sirleaf was the Minister of Finance.

“Unfortunately…” Prof. Boley explained, “…when the time came to build the new university, it was decided instead to build a new dormitory, the Elizabeth Tubman Hall on Capitol Hill, then a full university.”

Still unhappy about that move, she said the government decided to go along with the survey of the Fendall Land, and working with a joint team of Liberians and Germans in 1962, it put together a plan for Fendall mapping and did the survey.

She said they put in mushroom cornerstones with the capper tap, saying those stones are still embedded all over the place today at Fendall.

In 1972, the College of Agriculture was the first to move to Fendall, she disclosed, adding that it was followed by the Science College, and the leadership of the University of Liberia planned to move the entire university campus to Fendall, leaving Capitol Hill to serve as the place for graduate and professional schools.

Along the way she said the war interrupted the plan, and Fendall then became a center for Internally Displaced Persons, housing a lot of people.

In 2014, she recalled that the university again started to move to Fendall, and then squarters got on the land as the vicinity had become an attraction for business.

She explained that the land was given to squarters by one of the university’s own securities who was taking money for portions of land for LD$4,000.00 with the understanding that they will not build anything expensive because the government could come for its land anytime.

According to her, the security then became a landlord to the people, collecting LD$500.00 monthly, which was found to have amounted close to LD$300,000 per month.

Realizing the problem at hand, she noted that a special presidential committee was then set up comprising the Ministry of Lands, Mines and Energy, Ministry of Public Works, the Office of the President, Ministry of Internal Affairs, Lands Authority, the University of Liberia and the Ministry of Justice to look into ensuring that the university got its property back.

She said when the people realized that they would be removed, they took the University of Liberia and the Government of Liberia to court— a case the university won in May 2016, thus regaining full possession of the Fendall property.

According to Prof. Boley, the original size of the land was 7,000 acres, but explained that when the Ministry of Lands and Mines did their survey, they indicated that they could not find the other points.

“It was a good exercise, sometimes it was very tiring, but it was challenging and the good thing is that, that crack team put together, knew very well they had a task to perform. And I dare say that team comprised Urban and Regional Planners, Civil Engineers…, people with legal background, people with administrative background, and people with financial background,” she said.

According to Chairperson Boley, the university told Lands and Mines to give the 5,800 acres that were found while scouting around for the other 1,200 acres.

“And the reason for that was simple. Time was running up on us and people were still encroaching on the land. We wanted to make sure we had possession of what we owned,” she continued.

Realizing that too many people were encroaching on government properties, she said the Land Authority, under its new Act, decided to deed out lands to government entities that have been given land.

She said the first such entities to receive a deed from the government was the Roberts International Airport, after which UL’s request to be deeded for its 5,800 acres of land was granted by the Land Authority and the Fendall and Sinje properties have been deeded from the Government to the University of Liberia.

She noted that UL President Dr. Nelson reinvigorated the committee, energized it to get back to work and it has done the spatial planning for the 5,800 acres.

According to Prof. Boley, the land is mapped out, and huge spaces are left for all and any college that will come, saying space will also be available for commercial and industrial activities, academic and residential areas, among others.

Ms. Benetta Tarr, UL Vice President for Administration, thanked Dr. Nelson for pushing and encouraging the team to work, while at the same time having a listening ear for the people he leads.

“If we did not have this kind of personality with us, we wouldn’t have been where we are right now,” Ms. Tarr said.

She reassured Dr. Nelson that the 1,200 acres of land that are being searched for will be found. Vice President Tarr appreciated the strong cohesion among the team members of the university, noting that the administration of the university stands strong by Dr. Nelson and it’s also in full support of VP Boley’s endeavors.

Dr. Moses Zinnah, Vice President for Academic Affairs, emphasized that being among the top 20 universities in seven years, the environment for work is important.

According to him, the environment matters when it comes to keeping one to work or at school for longer hours, unlike working in a place where you don’t know when the light will come or go and you are fighting for a space to work.

“It is agonizing, and I know people in management, when I see it, I feel it because I know what it should be, but the context is important. We are competing with a lot of demands with the fiscal space we have. But if you don’t have a plan people cannot help you,” Dr. Zinnah said.

He lauded Dr. Nelson for not attempting to  ‘re-invent the wheels’ but instead building on what others started, referencing the administration of former UL presidents Dr. Emmett A. Dennis and Dr. Ophelia Inez Weeks.

“It is important when you are a manager, don’t kill yourself starting all over. You will crash,” Dr. Zinnah cautioned, adding that building on what other people have started and looking beyond is a good leadership.