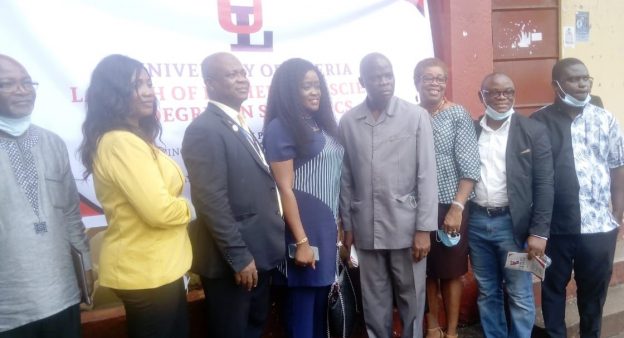 The University of Liberia, in partnership with the Liberia Institute for Geo-Information Services (LISGIS) and with support from the World Bank, has launched a Bachelor of Science Degree in Statistics.

The program is part of a World Bank sponsored project named “Harmonizing and Improving Statistics in West Africa,” (HISWA).

The new program in statistics will train students and researchers to carry out evidence-based research on extensive observations and experiments, collection and analysis of data in laboratories, within social-economic settings and public systems to derive inferences about the behavior of such systems.

Mr. Michael Gboneh, Instructor and Chairman of the Department of Mathematics, told the audience at the launching ceremony that students who complete the statistics program will gain competencies in various topics, including descriptive statistics, estimations, confidence intervals, probability and inferential techniques, simple and multiple regression, analysis of variance and more advanced topics.

He added that the program will address the huge human capacity gap facing Liberia especially in Mathematics and other Mathematics related fields. “These gaps are essentially depriving the country of meaningful development drive in several areas.” Gboneh asserted. The Chairman of the Mathematics Department lamented that the course has become so mystified that students rarely consider it a key human development science. “This stack realization presents an [urgent] need for robust intervention through tailored long-term programs to improve and attract deserving scholars to this field.”

Gboneh believes that Mathematics permeates every field of applied science, including Engineering, Economics, Finance, Health and other professions, hence, the growth and quality of technology in Liberia undisputedly depends on the application of a well-structured Mathematics program that focuses on the development of young Liberians.

Also speaking at the ceremony, LISGIS Executive Director and Professor of Mathematics, Statistics and Demography at the University of Liberia, Francis Wreh, said that he was thrilled by the launch of a Bachelor of Science Degree in Statistics following more than thirty years of teaching.

“This time around Statistics has been granted [a place]. It has been in the race, now it has a place in the race. So, I am thrilled to be part of this occasion which marks the beginning of efforts to establish a Bachelor of Science Degree in Statistics here at the University of Liberia,” Prof. Wreh declared.

He asserts that the lack of proper collection, analyses, dissemination and integration of sectoral data for development is one of the aged-old problems in Liberia.

“Prior to, and after the civil war, the issue of Statistics in the country has been a concern to the government and partners. Very limited and scanty data were being generated to create room for planning and policy making. Data collection to inform policy makers was still not to the interest of those who wanted the information. Prof. Wreh revealed.

According to Prof. Wreh, the paucity of statistical foundation is one of the problems constraining productivity in Liberia. “… Liberia had independence in 1847 but its first national census was conducted in 1962, one hundred fifty years after Independence. From that time, censuses and surveys have been held at irregular intervals.” Wreh pointed out.

According to Prof. Wreh, there were no statistical training institute in the country until 1980 when a statistical act established the Liberia Institute for Geo-Information Services, which was lately legislated in 2004. He continued: “The establishment of an undergraduate degree program in Statistics is starting now in 2021. These main proximate determinants of the perennial problems that confront Liberia’s data users and producers have implications for the development data capacity issues in the national statistical systems.”

Prof. Wreh expressed government readiness to address capacity gaps and described UL and LISGIS partnership as a major component to capacity building under the HISWA project. He added: “For this reason the University of Liberia, which is the state own university, has been identified to spearhead this component and the subsequent signing of a Memorandum of Understanding (MOU) signals a new beginning of the partnership.”

Receiving the symbolic turnover of the program and facilities, UL President, Rev. Dr. Julius J. S. Nelson, Jr., thanked LISGIS for the partnership that culminated into a BSc. program in Statistics.

Dr. Nelson encouraged recent graduates to apply for admission into the program, emphasizing, “I want to encourage those of you who are recent graduates in Economics, Finance, Demography, Geography, Mathematics and Engineering that there is an alternative approach for you to prepare yourself for the future of the Republic of Liberia.”

The Bachelor of Science in Statistics is now being offered, beginning this semester, at the University of Liberia. According to Dr. James McClain, Dean of the Thomas J. R. Faulkner College of Science and Technology & School of Environmental Studies and Climate Change, three First Semester courses from the Department of Mathematics under the Statistics curriculum are currently available for enrolment by interested students. The program requires between the completion of 130 to 136 credits, which includes theories, computer programming and field research, before a student is awarded a Bachelor of Science in Statistics. It is structured as a four-year degree program but students who have already done sufficient Mathematics courses have the possibility of completing in three years.