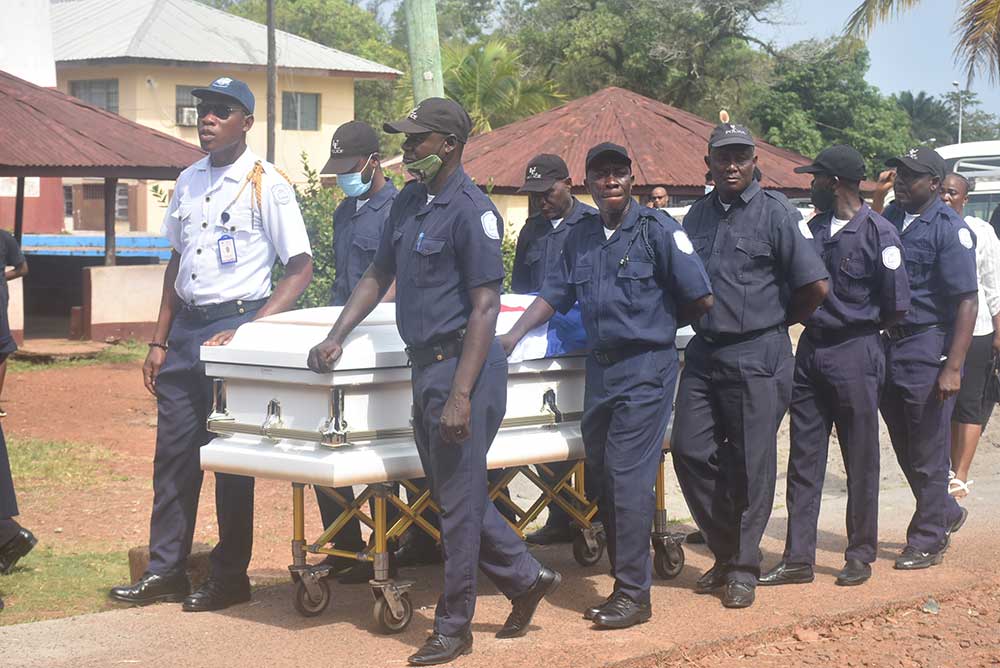 The University of Liberia (UL) has held a vigil service for its former president, the late Prof. Dr. Emmet A. Dennis, who died on March 6, 2022 in Englewood, New Jersey, United States of America.

Dr. Dennis’ remains were given appropriate escort by UL authorities into the auditorium at the start of the vigil service.

“This is a profound loss for Liberia’s flagship institution of higher learning, the University of Liberia, and the educational sector of the Republic of Liberia,” said Dr. Nelson, who served as Vice President and Dean of Students during the tenure of Dr. Dennis.

President Nelson described the late Dr. Dennis as a man of deep trust with extraordinary talent and a gifted administrator par excellence.

President Nelson credited the late Dr. Dennis, and Professor Emeritus at the A.M. Dogliotti School of Medicine, University of Liberia, and former member of the UL Board of Trustees, for having advocated for the expansion of the University of Liberia campuses, adding that UL now has four campuses.

Dr. Ophelia Inez Weeks, immediate past president of the University of Liberia and current Executive Director of the Ellen Johnson – Sirleaf Center for Women and Development, said she will miss her colleague and mentor, the late Dr. Dennis.

In a tribute read on behalf of former Liberian President and Visitor of the University of Liberia, Mrs. Ellen Johnson – Sirleaf, Dr. Weeks said it was former president Sirleaf’s utmost pleasure to appoint Dr. Dennis as UL’s 13th president.

“He was indefatigable, internationally respected, an eminent professor, scientist and scholar who had a deep commitment to higher education who also had a wonderful sense of humor. A Liberian who had maintained a distinguished and illustrious career in the United States of America,” said Dr. Weeks.

She said the late Dr. Dennis was a man who helped establish Liberia’s first Biomedical Research Institution and had served as its founding Director in 1975.

She explained that Dr. Dennis was a strong advocate for the establishment of a National Public Health Institute of Liberia (NPHIL). Dr Dennis served as a member of the institute’s inaugural board.

Speaking from a text taken from the New Testament Book II Timothy 4:6, Dr. Taylor described Dr. Dennis as  an educator par excellence, a distinguished Liberian scholar, a servant of God and a man of great humility and faith.

Representative Matthew Zarzar, Chair of the Board of Trustees, University of Liberia, said the vigil service was a celebration of the home-going of a fellow trustee, a scientist, an educator, a professor, a statesman and a visionary.

Dr. Romelle Horton, President of Cuttington University, said Dr. Dennis’ death truly hit her and the university family hard, adding that “it is difficult to express the sadness that they feel.”

Dr. Horton said the late Dr. Dennis was a dedicated son of this soil [Liberia], a family man, and a strong educator who brought his deep knowledge of academic excellence to a variety of issues that have been critical to the transformation of the educational sector, especially tertiary education.