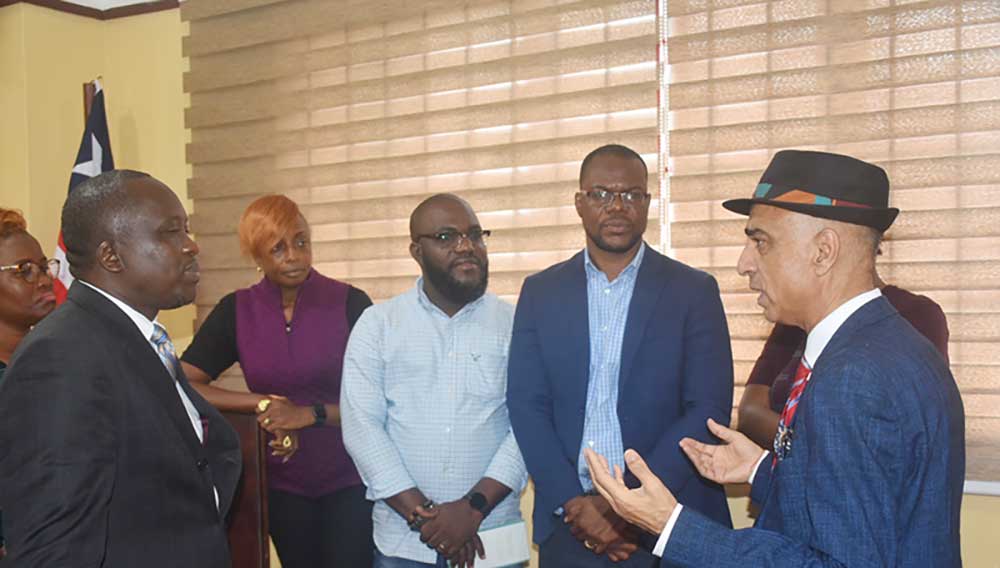 A delegation of students from the Louis Arthur Grimes School of Law at the University of Liberia (UL) are due to partake in a Moot Court competition in South Africa among several law students under the Federation of African Law Students (FALAS).

They held their final rehearsal under the Law School palava hut on Capitol Hill on Thursday, September 29, 2022, demonstrating their level of preparedness for the African Law Students conference during which the competition will be held from 3-5 October in South Africa.

The moot court practice is a co-curricular activity for law students that gives them an opportunity to practice as if they were actually in a courtroom.

Before their trip to South Africa, the students and the Dean of the Law School, Prof. Dr. Jallah Barbu (Cllr.), on Friday, September 30, 2022 met with South African Ambassador to Liberia Prof. Iqbal Jhazbhay at a meeting presided over by UL President Prof. Dr. Julius Julukon Sarwolo Nelson, Jr.

The meeting was held in the President’s conference room on the University’s Capitol Hill campus.
At the meeting, Prof. Iqbal Jhazbhay said he met with the students to hear from around the table what were the expectations of their visit.

“I know you want to win, and I know the University of Johannesburg Moot Law Team is a very strong one, yes,” Amb. Jhazbhay told the UL Law students jokingly.

He added that the good thing is that they are going to meet different teams from around the globe.

Amb. Jhazbhay stated that the timing of the UL Law Students’ visit is very courteous, noting that he thought a lot of points will connect, and they will hear a lot of intellectual lectures during their visit.

He said like in Liberia, student leaders and youth leaders leave their country to return with fresh ideas and perspectives which may be different from others.

“What interests me about our relationship, at least for the law aspect, legal education, is that the University of South Africa has a whole batch of our law books in their library,” said Dean Barbu.

He told Amb. Jhazbhay that UL Law Students’ expectation is to defeat the University of South Africa.

Student Williamina G.E. Buddy, President of the Louis Arthur Grimes School of Law Students Association (LAWSA) thanked Amb. Jhazbhay for meeting the students to guide and mentor them. She expressed hope that there will be continued cooperation between the South African Embassy and the Law School students.

Earlier during the moot court rehearsal on Thursday, Dean Barbu explained that the Louis Arthur Grimes School of Law is part of several law schools under the Federation of African Law Students. He said the African Law Students Conference due in South Africa also involves competition, and the UL Law School is fortunate to be a part of the teams that will be competing.

In preparing for this international engagement, Dean Barbu said over the past few weeks the Louis Arthur Grimes School of Law has been working with the students. “And today is the time that we set for them to conclude their rehearsal by undertaking a very serious debate – one which we believe will now give us a clear signal as to what they will do when they are in South Africa,” said Prof. Jallah.

The model hypothetical case that the moot court team is using at this year’s Federation of African Law Students Annual conference borders on Human and Peoples’ Rights in the case between Africandalia and the Republic of Bonghal.

In the hypothetical case before the African Court on Human and Peoples’ Rights, parties will be engaged in legal battles. During the rehearsal held on Capitol Hill, the complaining party (Applicant) was represented by Gabriel F. Ndupellar, Malayah Tamba Chieyoe, Vinton J. Johnson and Kwame E. Ross.

The respondents or Government of Bonghal was represented by Toe Elton Freeman, Alimatu Nuri Hutchinson and Robert C. Boundolo.

The Law School has had many moot court activities, and many of those on the panel of judges are those who have played a role in previous moot court competitions.

They included practicing senior lawyers, the former Dean of the Louis Arthur Grimes School of Law Prof. Cllr. Jonathan Williams, judges, magistrates, and an attorney – at – law, among others..

The panel of judges quizzed the students based on their own presentations and arguments, and later gave individual assessments of how the participating students performed. To further give the students a taste of how the courtroom is run, a working court officer was brought in from the Temple of Justice in Monrovia to serve as a sheriff.

The hypothetical case used for the rehearsal was about a country called Bonghal, a small landlocked country in Southern West Africa. One of the cases filed against Bonghal was about one Ferana Ditori, a well-known female journalist working for a Bonghal private newspaper, The Sun.

She was said to have gone missing while travelling via a ship to participate in a conference on freedom of expression in Razakote, a state in North America.

The respondents, acting as lawyers for the Government of Bonghal, were blamed for her disappearance. Bonghal refused to launch an investigation into her disappearance, saying it thought Ferana Ditori did arrive in Razakote. The respondents claimed that in any event, it was not their duty to investigate what happened on a ship that was on its way from Perunada to Razakote.

The complainants also lamented that nationals of Perunada who fled the political crisis and entered Zamgogo were denied asylum.

On 15 September 2017, police in Bonghal arrested 1, 350 undocumented Perunadians who had returned illegally to the country through unofficial entry points. They were put in police cells and detention centers, where they remained. But the authorities in Bonghal had argued that the country had no more space for asylum seekers in any of the three designated ‘refugee camps’ in the country.

Also relying on the Bonghal Children’s Act of 2007, the local authorities in Bonghal took children from the streets without parental care along with few adults into state custody ‘for their own care and protection.’

But the complainants alleged human rights violations and lamented that the kids were being kept in solitary confinement.

Bonghal had argued that the management put the boys and girls on opposite ends of the dormitory. The children were provided with sufficient food, hygiene facilities, access to a health dispensary, and a basic library where they could study.

Additionally, the complaints raised the case of Khalil Limtoto, a successful dentist and (in) famous lesbian, gay, bisexual transgender and intersex (LGBTI) activist from Perunada who has been campaigning for the repeal of anti-sodomy laws and the enactment of specific laws against LGBTI discrimination in Perunada.

Securities in Perunada were said to have raided his house in search of him on charges that he was contravening the laws of Perunada for his LGBTI activism. But Limtoto’s application for asylum was rejected by the Bonghalian Status Determination Committee (BSDC) after waiting for many months.

The complainants contended that the African Court had jurisdiction over these cases, while the respondents said the court lacked jurisdiction.

For over three hours, the students were engaged in a debate under the palava hut in the final rehearsal. They also faced questions from the panel of judges.