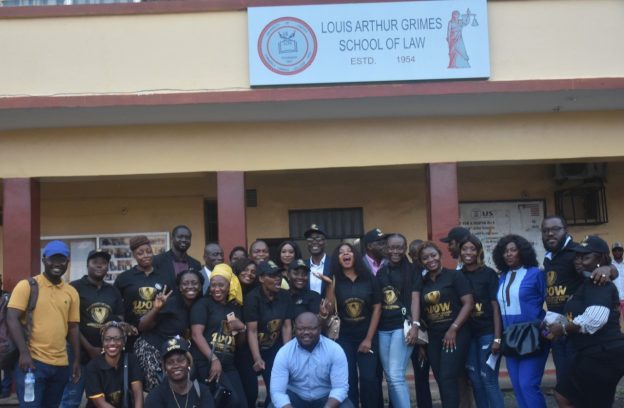 The Law Students Association (LAWSA) at the University of Liberia (UL) has opened an office for female law students known as the Women on Women Movement (WOW) Legal Sisters on the Capitol Hill Campus.
The grand event was held Thursday evening, November 17, 2021, and brought together both female and male students as well as authorities at the Louis Arthur Grimes School of Law and other senior counsels.
The idea to establish the campus – based WOW Movement for Legal Sisters at UL grew out of the thoughts of some female students who saw the need for women to collaborate and have a safe space where they can gather and share ideas about what they experience at the Law School and to find ways of addressing societal issues that affect them. According to some of the founders, the intent of the WOW Movement office is to gather female law students at a safe place where they support and work with each other, help in counseling peers who may have family issues so that they can stay stronger as they develop the courage to pursue their dream of becoming lawyers.

Judge Eva Mappy-Morgan, Professor of Law at the Louis Arthur Grimes School of Law and a key pillar of support to the formation of the WOW Movement, gave special recognition to Cllr. T. Negbalee Warner, Dean of the Law School for his energy, passion, zeal and vision that the school follows.
In trying to find a space for the WOW Movement, Judge Mappy-Morgan explained that they went to Dean Warner, and after their engagement with him, they now have an office space at the Law School. She said the Law School is a tough place to be, explaining that some people have been divorced, some got married there, and others have even died. “But we are just encouraged. And for the Deans, myself and all of the professors, what we see is a perpetuation of ourselves and this is what a good leader does. You perpetuate yourself,” she said.
Making remarks at the program, the Dean of the Louis Arthur Grimes School of Law, Cllr. T. Negbalee Warner, said he was quite impressed by what the Law students and their leaders continue to do. He said it is a worthy effort for the female law students to focus on themselves and see how they can make the place safe, encourage and support one another with their studies. “And you find in me a support, an ever – present support,” Cllr. Warner said, adding that if there are policies that they want the Law School to make to be very much progressive, they can count on him as a willing partner to make the necessary change.

He also mentioned that everything achieved at the Law School comes in large part from the willingness of the students to understand his vision partly, ranging from having a hygienic and conducive environment to trying to invest in technology. “And so you went beyond just paying your school fees to the Administration to accept for us to collect from you your facility fees, which you paid. That has been quite helpful,” said Dean Warner.
Additionally, Cllr. Warner said he is embarrassed that when people are citing the achievement that he has had at the Law School, he looks back in the privacy of his thoughts and admits to himself that a substantial percentage of that, maybe 60 percent, is due to the motivation, encouragement, support and dedication of Judge Mappy-Morgan. “Your Honor, we appreciate you sincerely, let me say it again,” said Cllr. Warner, adding that history is being made at the Law School.

Earlier, making the official opening statement, Ms. Lakshmi Moore of the Liberia Feminist Forum and immediate past Country Director, Action Aid Liberia, said the day of opening of the WOW Movement office was not just historic, but also a symbolic moment and a beacon of hope for those that are on campus.
She said further that it’s a physical manifestation of the women’s needs on campus, especially Law students.
Ms. Moore noted that it is true that Liberia is a patriarchal society, adding that “it is deeply entrenched, it is reinforced by culture, by tradition that says who is a good woman, who is a bad woman and that triggers down into who’s a good student, who’s a bad student.” She said when the Law students are engaging in the Women on Women Movement, it is not about the beautiful space they occupy, but it’s also about how they take the politics of their solidarity to their classes. She challenged the women not to rest in ensuring that the legal system in Liberia is inclusive enough and to ensure that where loop holes still exist, they can be addressed so that there can be no more ceilings that must be broken.

Also making remarks, Mr. William N.C.A. Caranda, LAWSA president, congratulated the WOW Movement for the program, and assured the group that beyond the material support, LAWSA will stand with them as long as the space is to be kept safe not only for the current students, but for those that will come after them.
Giving the overview, Ms. Joyce B. Nagbe, WOW Program and LAWSA Gender Desk Lead, explained that the Legal Sisters are all the female students in the Law School, but through the WOW Movement they will support each other. According to her, Liberia is a deeply patriarchal society, and its traditions have hindered and caused barriers against women. She added that going to the Law School is not anything different because the same people that are in the society and the communities are the same people that go to the Law School. She said the WOW Movement is therefore formed to be able to address issues when they happen at the Law School.