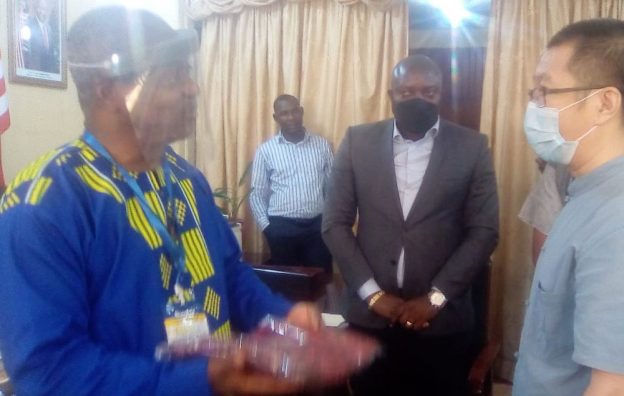 Two of the four visiting professors teaching Elementary and Advanced Chinese Language at the UL Confucius Institute, Fan Jinhong and Zhang Xuemei,  have been honored by the President  of the University of Liberia, Rev. Dr. Julius J.S. Nelson, Jr., for their outstanding contributions as they depart Liberia.

Dr. Nelson thanked the professors and handed over a specially made Liberian attire as a gift  to each of them  on behalf of the university in recognition of their dedicated services to the UL.

Professors Jinhong and Xuemei, who are husband and wife, taught at the  Confucius Institute for two and three years respectively.

Dr. Nelson hosted the four professors at his Capitol Hill office on Thursday, October 29, 2020 with two members of his cabinet—Vice President for University of Liberia Relations, Atty. Norris Tweah and Vice President for Finance and Fiscal Affairs, Mr. P. Garswa Jackson— in attendance.

Dr. Nelson recounted the Sino-Liberia relationship, describing it as very successful and from which the UL has benefited in many ways.

Dr. Nelson disclosed that the UL Administration will hold an official program to recognize and  honor the four professors  on the UL Fendall campus on Monday, November 2, 2020.

“We could have done it in a different way by bringing the students, faculty and staff together to say a big thank you, but unfortunately that can’t happen because of the situation we have today due to COVID-19,” Dr. Nelson stated.

Professors Xuemei and Jinhong, in separate remarks,  thanked the UL Administration for recognizing their work.

Says Prof. Xuemei: “Let me say that I’m very grateful to the UL family for such a recognition and hope that I can always come back to the university to teach again.”

She described the students at the Confucius Institute as very intelligent and smart.

“A few of the  students were offered scholarships to study in China but could not travel as a result of COVID-19,” She said. ”I look forward to seeing them travel to my country to study once the situation is improved further.”

In response, Prof. Jinhong said: ” I am happy for the honor bestowed on us today and I want to also  say thank you Mr. President on behalf of my wife and I.

“I wish I can come back again to the UL to teach. It has really been a wonderful experience interacting with the students and fellow faculty for three years.”

The Confucius Institute at the University of Liberia was founded in partnership with the Government of the People’s Republic of China to promote Chinese language and culture, support local Chinese teaching internationally, and facilitate cultural exchanges.