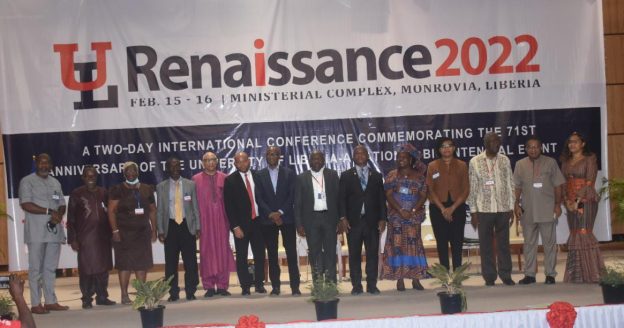 The University of Liberia (UL) has launched its newest academic unit, the Center for Migration and Diaspora Studies.  Serving as Guest Speaker, acclaimed Afro-American researcher and scholar Dr. Molefi Kete Asante officially launched the new academic unit at the start of the University of Liberia Founder’s Day at the Ministerial Complex in Oldest Congo Town Tuesday, February 15, 2022.

According to him, the University of Liberia has set the right step by the launch of the African Diaspora Studies. He said Liberia has a history of courage and devotion to the idea of a universal African community that demonstrates more than most nations, acceptance of people from other communities. “It’s no wonder that the University of Liberia has become the founding father to the idea of African Diaspora Studies,” Dr. Asante said amidst applause. “I bow before the various heroes and heroines who have insisted on maintaining democracy although we know that of all political systems democracy’s fragility is dependent upon vigilance,” he continued. “You represent a powerful example of hope, integration of peoples, and the vision of a new age of Pan African democracy.  I am here to testify to your overwhelming sense of the love of freedom, traditions, and good character,” he added.

Dr. Asante believes that the Center of Migration and Diaspora Studies will enhance  the idea of promoting the resilience of Africansim.

The acclaimed Afro-american researcher and scholar expressed delight that the UL can  inculcate Migration and Diaspora studies to form part of its academic programs. “I am very happy that the UL has become the fertile ground for the expansion of Migration and  Diaspora Studies…The UL is the first step of promoting Liberia’s cultural values. Your history must define you, and not you defining your history.” Dr. Asante stated.

He argued that the origin of humanity started in Africa, noting that the first nation in the world was Africa, referring to Egypt which according to him was given a Greek name.

Dr. Asante has called on the University of Liberia  to maintain vigilance and encourage democracy, individual and collective rights and the rule of law.

Dr. Asante said it is the respect for the rule of law that will align opportunities to Liberia amidst the proposal for a program of African Diaspora Studies.

He admonished Liberians to resolve and rise above ethnicity and to protect their smallest and least protected groups.

Talking about the diversity in the human race, the African – American researcher argued that Africans knew diversities more than anybody else, saying Africans knew that some people were short, tall, light or dark skinned, or had blue or black eyes. Yet, he said, Africans did not rank anybody on the basis of their look, color of their skin, eyes, height or shape. But he said the Europeans, Americans and Asians did.

Dr. Asante admonished Africans, especially Liberians, to take their rightful place in upholding those unique values. “No nation is more qualified than you. You need not to pay homage to them if they do not pay homage to you,” he said.

Giving the historicity of Afrocentricity, Dr. Asante explained that Afrocentricity as an African concept was born in Buffalo, New York, in 1980. But he said it took root in Philadelphia and has spread around Africa and the world. Japanese, Russians, Britishers, and Chinese, have latched on to this idea, he said, adding that as the creator of this idea, he is happy to personally introduce it in Liberia as he has to other countries in Africa and the world.

Dr. Asante explained that the narratives and values of the African continent  are embedded into the idea of  Afrocentricity and would require African themselves to project. “Africans must be seen as major actors and makers of their history and not mere spectators.”

He lauded Liberia particularly for having observed 20 years of unbroken peace, and for its people’s commitment to the rule of law.

Additionally, Dr. Asante lauded H.E. President George Manneh Weah, the President of the Republic of Liberia and Visitor of the University of Liberia, for keeping to his promise to respect press freedom, freedom of speech and rule of law.

“The UL Founder’s Day is central to the founding of Liberia in view of the historical significance of the inauguration of Liberia College, UL’s precursor, a decade and a half after Liberia’s independence,” Dr. Nelson said.

The two – day conference has attracted national and international guests, including the delegation from the University of Sierra Leone, led by its Vice Chancellor  and Principal, Prof. Foday Sahr, among others.