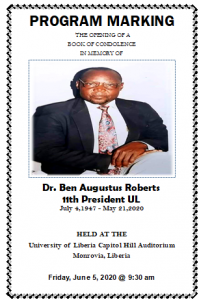 In announcing the signing of the book of condolence, Dr. Nelson eulogized Dr. Roberts as a valuable member of the University of Liberia family who served with distinction at the highest level of the university administration.

Dr. Roberts was appointed President of the University of Liberia in 1999. He served from 1999 to 2003.  Prior to his appointment, he served the university as an Assistant Professor and Chairman of the Department of Geography.

UL invites officials of government, the university family, and the public to join as it honors the fallen President.