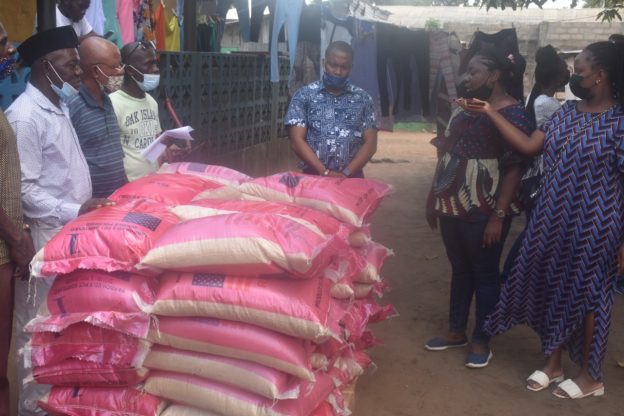 The President of the University of Liberia (UL), Rev. Prof. Dr. Julius Julukon Sarwolo Nelson, Jr., has come to the aid of erosion victims in New Kru Town with the distribution of 40 bags of 25kg rice, following a recent disaster that left dozens of family heads and their children seeking shelter in school buildings and Churches.

Presenting the donation on behalf of the university family on Thursday, August 19, 2021, Madam Decontee Tubman, Director of Protocol, University of Liberia, told the erosion victims that their son and President of the University, Dr. Nelson had sent the delegation to identify with those affected.

“So we have come to present 40 bags of rice to those that were affected by the disaster,” Madam Tubman said Thursday in New Kru Town. The President of the University undertook the initiative to identify with the residents following a recent sea erosion in New Kru Town.

New Kru Town Vice Governor, Mr. Wle Wle Kofa along with other leaders of New Kru Town and neighboring communities received the donation. Based on a list of affected persons submitted to the university, 40 bags of 25kg rice were distributed to beneficiaries during the visit.

Having received the donation, Mr. Kofa said the donation was not a mistake, noting, “you must know your roots and you  must identify yourself with your people.” He expressed confidence that his alma mater, the University of Liberia can never let the people go down the drain, indicating that the visit by the university delegation and its donation of rice to affected erosion victims in the community was overwhelming. “And we want to say may God bless you, we thank your overall boss Honorable Nelson and the University of Liberia. We believe that you are getting somewhere else now. Instead of only tutoring us to do the better thing, you are also giving to our people that are in need. May God bless the University of Liberia and save the Country,” Vice Governor Kofa said.

Mr. Joseph T. Dennis, Chairman of Lagoon Community also extended thanks to Dr. Nelson and the University of Liberia staff that stood behind the president to carry out the wonderful initiative of identifying with those in need. “We have been crying so many times and this is the very first time. The very first one … came from the Honorable Representative. The University of Liberia has been the one that came up and said no, we will go and identify with our people. So we thank you so much,” said Mr. Dennis.

Mr. King Koffa, Block Leader in Lagoon Community said he was very happy because the University of Liberia had made him feel great because of its intervention.

In an interview with one of the erosion victims, Madam Mary Boyennoh thanked the university for the donation, saying it came at a time when she and other victims did not have the money to buy food. She explained that it was a challenge to start all over after water took over one of her two concrete houses, forcing her and her family to now squeeze themselves in the remaining one bed – room apartment that is not yet so badly affected. Due to the erosion, Mary said she, her husband and their five children are now sleeping in one room.

Madam Felecia Wright, another New Kru Town erosion victim, said it was unfortunate that she had just finished paying her rent before the erosion occurred in July that led her and her three children to shelter in a school building. She thanked the University of Liberia for the donation of rice to her and other victims. Felecia, a single parent, however said she is worried that when school opens, she and her children will have to relocate. But she said it is difficult to raise money now to pay rent for a new place because she is not working, thereby pleading for the government’s intervention.