The University of Liberia (UL) says it can no longer sustain the monthly bill of US$37,000 to run buses for students. A research report presented at the Joint UL Faculty Senate and Administrative Council held on Tuesday, May 10, 2022, recommended to the Administration that the Bus Service be outsourced.

The research found that on the same route for which UL students pay LD$20.00, the current minimum commercial fare is LD$250.00. The research found that revenue generated from the UL Bus Service is only US$6,249.00, leaving a major difference of over US$36,000 as a loss on a monthly basis which the University must continue to cover to keep the buses running.

According to the same report, some students do not want any increase in the cost of a single trip bus ticket beyond LD$50. However, the research analyses demonstrated that the LD$20.00 fare per trip is no longer sustainable.

One of the options contained in the report, which is also recommended by the research team is to outsource the Bus Service to the National Transit Authority (NTA) to reduce the financial burden on the university.

The research was requested by the University of Liberia’s Administration based on observation that the Bus Service, which earlier required students to pay LD$20.00 per trip to campus when the service was introduced in 2004, has now appeared to be unsustainable due to some factors, including changing economic realities affecting the service.

Aside from sending out 700 survey questionnaires to students to get their views about the service and what could be their recommended solution, the research team also accounted  for developments at other universities in Liberia and the region that provide similar service.

Receiving the report, the President of the University of Liberia Rev. Prof. Dr. Julius Julukon Sarwolo Nelson, Jr., said the University is in a very difficult fiscal situation to routinely cover a US$37,000 operational deficit in order to keep the buses running for students. “But right now, we ain’t able. That $37,000 U.S. dollars monthly that we are spending we don’t have it. We are not able to keep spending it and all of us will face the reality,” President Nelson stressed.

He supported the option that calls for outsourcing the service to the NTA and added that the transit authority is a government agency that understands the transport sector and its social responsibilities. He explained that the University of Liberia took on the initiative in 2004 to ensure that students of the sciences were transported from Capitol Hill to Fendall. “But [in] 2004 it was $20 dollars (Liberian Dollars) from Capitol Hill to Fendall. 2004. Today it is 2022 and the argument is we should still continue the 20 dollars, even though the real cost, the commercial value is 250,” said Dr. Nelson. 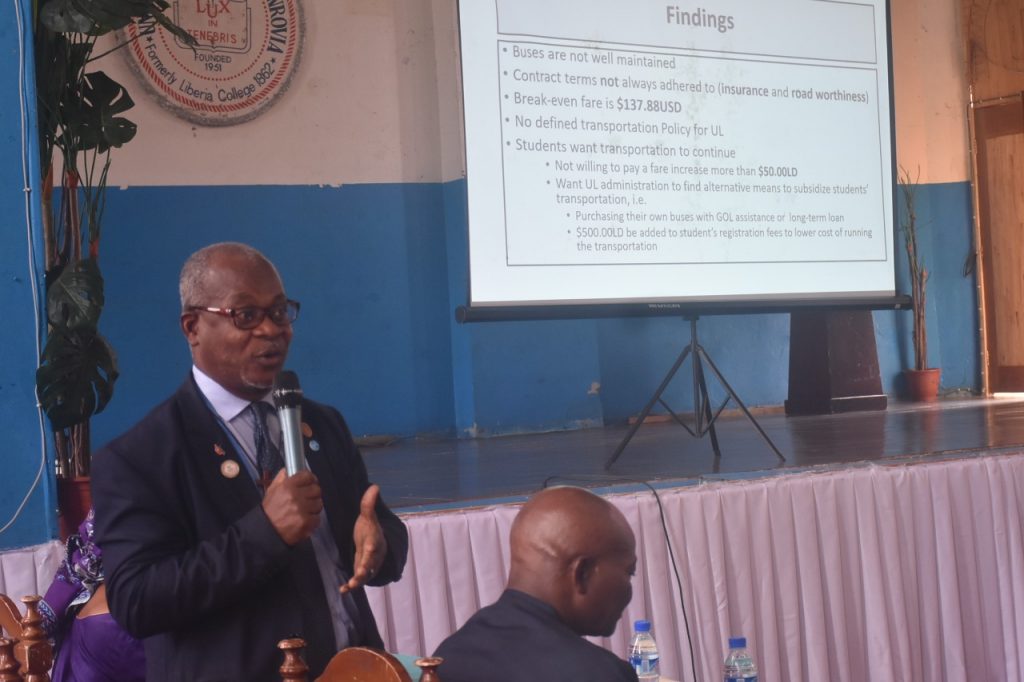 The options were to increase transport fare to LD$50 and whatever amount that is outstanding should be paid by the government; that government purchases ten 65 – seater buses; that UL abolishes the Bus Service and outsource it to the private sector; and finally, to outsource the Bus Service to the NTA.

Of the four proposals, Dr. Reeves – Taylor said the research team’s recommended option was to outsource the Bus Service to NTA which is willing to provide dedicated buses to UL that could ply the same route for LD$50 per trip. “We thought that it was very appropriate that this option be explored because not only is that fare affordable, it’s much lower than the commercial rate,” said Dr. Reeves – Taylor.

She added that NTA has experience in transportation, it is a state – owned entity and it will remove the financial burden from UL. She said out of the 700 survey questionnaires that were sent out to students, the research team received completed questionnaires of 652. According to her, in-depth interviews were also conducted with key departments within the university, staff and students of other universities within Liberia – African Methodist Episcopal Zion University and the Adventist University of West Africa –  that provide similar services.

Further, Dr. Reeves – Taylor said interviews were held with staff from the University of Ghana, University of Cape Coast and the Kwame Nkrumah University in Ghana to get a view of what is happening regionally, and also looked at what’s happening in South Africa and Nigeria.

Meanwhile, the University has committed to continue to remain engaged with the students and other stakeholders in finding lasting solutions to the transportation issue.