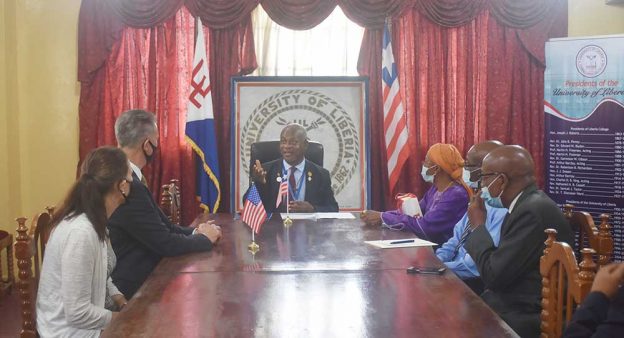 U. S. Ambassador to Liberia Michael A. McCarthy on Wednesday, April 21, 2021, paid a courtesy visit on the Capitol Hill campus of the University of Liberia to hold talks with UL President Rev. Dr. Julius J.S. Nelson, Jr. on strengthening collaboration and partnership.

The talks were held behind closed doors and was subsequently followed by a presentation of text books from the U.S. Embassy to the William R. Tolbert College of Agriculture and Forestry.

Ambassador McCarthy described his visit as an exciting moment to come to an institution of higher learning that has given out so much to educate the next generation of leaders.

Dr. Nelson, flanked by senior members of his administration, thanked Amb. McCarthy and his delegation for their visit. The UL President concluded the open segment of the meeting by expressing optimism that the long traditional and historical ties subsisting between the two countries and partner universities in the U.S. will be sustained.